Karma Has No Expiration Date 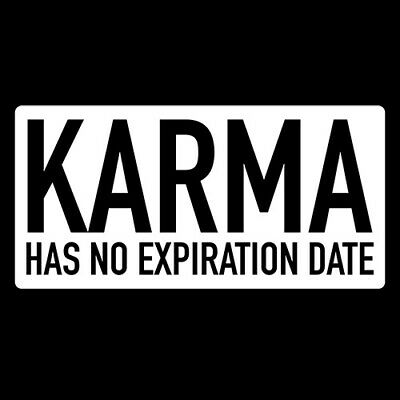 We’ve all heard of “Karma,” the proverbial “whatever you do comes back on you.” Although Karma is a Hindu concept all belief systems teach you can’t escape the consequences of your negative actions. To paraphrase Galatians 6:7 in the Bible “whatever a man sows, this he will also reap.”

It’s easy to be cynical about Karma. We’ve all seen criminals and bullies who hurt others and always seem to get away with it. Don’t we want them to suffer “Instant Karma” where they’re immediately punished for the harm they’ve inflicted? Although Karma isn’t instant, it touches everyone and can take years to reap.

One of my profound Karmic lessons began in Junior High School. I always loved history but unfortunately one of my instructors was Walter Lugo a coach who doubled as a history teacher. He reveled in humiliating students he didn’t like and although I was one of his top students he constantly ridiculed anything I said during class. Things got worse one day when I pointed out an historical error he made during a lecture.

The next day, I was in the hall at a water fountain with my friend Dave. Suddenly Mr. Lugo pushed through the crowd of students and accused me of spitting water at Dave. Before I could protest he shoved me to the floor. Everyone except Dave roared with laughter.

During these days of corporal punishment in schools Lugo knew I was powerless against him. I lay there totally humiliated as he stepped over me and sneered, “You worthless loser. You’ll never amount to anything!”

Apparently Mr. Lugo wasn’t psychic because 10 years later I was the youngest member of my law school class, graduated with honors and serving as a prosecuting attorney for the state of Florida.

I reviewed the police report and surveillance video. It was definitely him skulking around the sporting goods department stuffing cheap fishing lures in his coat pockets.

Lugo was about to reap his Karma because my job was to convict him. For a young prosecutor it didn’t get any better than this! The icing on this Karmic cake was that his case was before Judge Emory Cross who relished informing criminal defendants under his jurisdiction they lived “AT THE FOOT OF THE CROSS.”

To avoid trial Lugo’s attorney set the case for a plea and requested Judge Cross be lenient as this minor infraction was outweighed by Walter Lugo’s contributions to the community as a coach, church volunteer and teacher.

“Prosecution have anything to say?” Judge Cross asked.

Walter Lugo struggled to place how he knew me.

“I’m deeply disappointed the man who taught me to respect the laws and Constitution of the United States is a thief and a hypocrite.”

Judge Cross glared at Walter Lugo, “were you this young attorney’s history teacher?”

“Mr. Anthony, should he be adjudicated guilty and spend 30 days in jail?”

“I object!” exclaimed Lugo’s attorney, “If convicted guilty my client will lose his teaching job, benefits and pension.”

“Who’s the loser now?” flooded my mind as I stared at my trembling and powerless former teacher.

Then the light of realization resonated through me that even though Lugo’s bad behavior brought him here it also connected his Karma to mine. While I had tremendous power over Mr. Lugo, on the flip side of the Karmic coin, if I abused that power to inflict revenge wouldn’t they set into motion a new chain of Karma? Would that also mean I’ve become a bully like him?

“Judge Cross, this teacher learned his lesson. Jail time isn’t necessary and I request you keep the conviction off his record.”

“Mr. Lugo, your former student not your attorney has persuaded this court to order no jail and no adjudication, but don’t let me see you here again AT THE FOOT OF THE CROSS!”

Walter Lugo has long since passed. Ironically this teacher’s enduring lesson for everyone is “Be Nice” because Karma isn’t about revenge, but it also doesn’t have an expiration date.