MOURNING SICKNESS—FEELINGS IN THE WAKE OF MASS MURDER 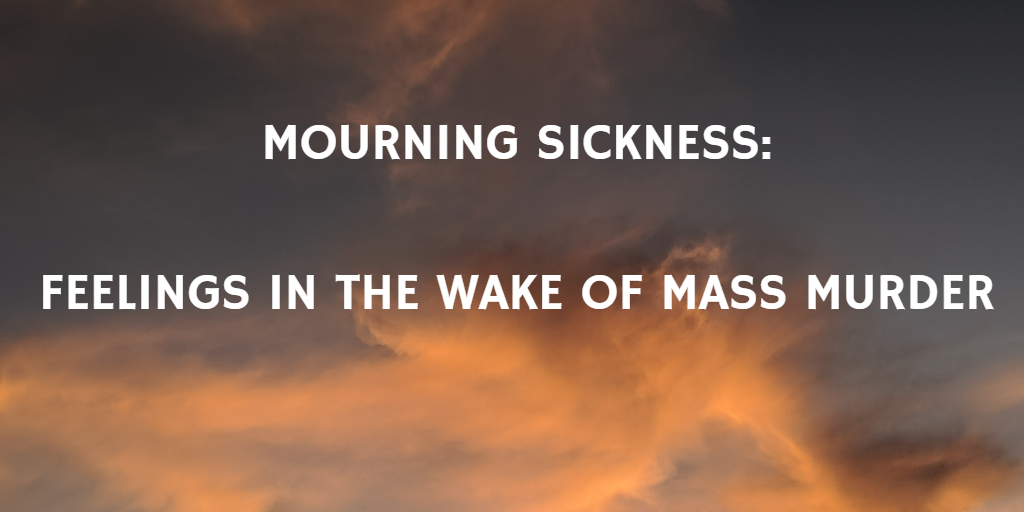 As a nation we are once again witnesses to the senseless mass murders.

The brutal slayings in Uvalde and Buffalo are the latest in a long line of horrific acts of violence inflicted by deranged minds driven by anger, bigotry hatred, violence, mental illness and fanaticism.

Sadly, this is the world within which we reside.

Although I normally avoid politics, I believe it is time we insist our politicians take action. The Native Americans have a saying that “the right wing and the left wing are part of the same bird.” Sadly, this bird has failed all of us by not enacting legislation to keep automatic weapons out of the hands of dangerous and unstable people.

These events may open up your own wounds caused by the loss of your loved ones. On some level you may feel connected to the families of the victims of these murders. If so, you very well may be experiencing “Mourning Sickness.”

Mourning Sickness is part of what is known as “Mass Grief.” This happens when thousands if not millions of people experience grief in reaction to the death of someone they do not personally know. Throughout history the deaths of famous people always elicited a major response. For example, the assassination of Julius Caesar plunged the Roman World into grief, chaos and eventually civil war. The death of President Abraham Lincoln shocked the world as the last casualty of the U.S. Civil War.

In the 20th Century, television brought the assassination of President John F. Kennedy into millions of homes. In the 21st Century the terror attack on 9/11 brought Mass Grief to a whole new level. The entire world saw not only death and destruction but made people everywhere feel somehow connected to it. Twenty-one years later due to advances in social media the brutality of the war in Ukraine is the most heavily documented military conflict to date.

As our telecommunications technology has rapidly expanded, we are now privy to the pain and suffering of our fellow humans on an unprecedented scale.

We see this phenomenon frequently in the deaths of celebrities like Robin Williams, Prince, Kobe Bryant, Ray Liotta, Betty White or John Madden. These are people who have been part of our lives even though we didn’t personally know these individuals.

This is a reaction to the pain and suffering of others whom you don’t know personally yet somehow feel akin to during this time of pain.

Yet these feeling of grief are really driven home when the people slaughtered and suffering are everyday people like you and I. The victims in Uvalde were elementary school children and their teachers. They were excited about it being the last day of school. It was supposed to be a happy day. Then terror struck!

It happened in a mainstream USA town—a place where people are supposed to feel safe.

Such brutality leaves us wondering why? It also causes us to struggle with our own feelings—and some of these feelings go beyond shock and sadness.

These are natural impulses, yet committing acts out of anger and a sense of revenge leads to destructive and nonproductive behaviors.

My advice as an attorney and as a psychic medium that helps people cope with loss is to let the professionals handle the situation. This means law enforcement and the criminal justice system. As much as we may want to take the law into our own hands, it is important to resist that impulse.

On one hand, Mourning Sickness brings so much pain to us, and on the other it also shows how the vast majority of humans actually do care about their fellow humans.

We are all the children of God and to feel empathy for our fellow brothers and sisters of all races, creeds, ethnicity and backgrounds is truly not only compassionate—it is healing. It forces us to confront our own feelings of grief and to work through them.

While anger and rage are normal, we must not let them dominate our thoughts and become our actions. Instead, our focus should be on taking the emotional high road and extent compassion, sympathy and love for the families of the victims.

How can we help in the healing process?

Forgiveness is the most difficult of all virtues. It may seem impossible to forgive those who have inflicted so much death, destruction and pain upon the innocent. Forgiveness may be a life time journey and I’ve found that if you cannot forgive someone, then ask God to forgive that person. It is a good first step.

Just as the soft rains fill the streams, pour into the rivers, and join together in the oceans, so may the power of every moment of your goodness flow forth to awaken and heal all beings — those here now, those gone before, those yet to come. — A Buddhist Prayer for Healing